Technical advances in repair materials and techniques can now make most alterations and restorations invisible to the human eye. Magnification and strong artificial light can help catch mechanical damages such as punctures and tears but are of limited use in detecting conditions beneath the visible surface. Ultraviolet radiation, commonly called black light, is a low cost scientific way to view repairs and damages that may be invisible in ordinary light.

Although a detailed understanding of how black light works is not necessary to use it, a basic grasp of the principles is helpful. Black light may be thought of as a stream of invisible energy. Different materials react in their own way when struck by this energy. Sometimes the energy is absorbed and released in colored visible light called fluorescence. Another material may absorb and retain the energy and appear black.

Whether you see colored fluorescence or solid black is unimportant. You are looking for areas that look different than the surrounding surface. The different appearance is your clue that the original surface has been disturbed. Either new material has been added or parts of the original material have been removed. In one case the original surface might go black and the repair materials might fluoresce. In another the opposite might be true. You are looking for a difference, not a specific color.

It's generally best to conduct your examination under reduced or dim room lighting. The larger the size and the more powerful the black light, the less the effect room lighting has on the examination.

The Surface of the Painting

Understanding the surface of a painting will help you conduct a more accurate black light examination. The surface of virtually all paintings is typically made up of at least five layers (see Fig. 3). The first layer is the support. This is usually canvas, paper, wood, parchment or metal. Next is sizing or ground which prepares the first layer to receive the paint. Third is the painting. This may consist of several coats including underpainting, overpainting and glazes. Fourth is the protective varnish. Finally, the top layer is the surface of dust, dirt, grime, smoke and grease that has built up on the varnish layer.

Heavy deposits of dust and grease can mask or reduce the surface reactions to black light. You can remove light dust with an air spray or soft cloth. Never purse your lips and blow on a painting. Your breath can carry droplets of saliva that can add unwanted moisture to the surface. When dry, saliva and other body fluids such as perspiration, show up under black light and may create confusion during examination. Heavier accumulations of dirt can be removed with mineral spirits but this is not a job for amateurs. Consider examining the painting with the assistance of a painting conservator. This is especially true for potentially valuable pieces.

When examining a piece, keep in mind that you are looking for differences and inconsistencies from one area to another. Specific colors are not as important as dark patches which appear to "float". Any area that appears different under black light should be studied under room light with magnification. The alternating use of white light (ordinary light), with and without magnification, and black light can be very helpful. A hand held flashlight is an ideal source of white light. It can be focused on small areas and saves you from walking back and forth to a switch to turn overhead lights on and off.

The varnish layer in both modern paintings and those made before 1900 typically has an overall yellowish-green color under black light. It appears as a slightly opaque transparent haze. Intensity of the color increases with the thickness of the varnish. Old dirty varnish has a more greenish cast than newer or cleaner varnish.

Repairs made to the varnish layer may appear as dark floating spots. Dirt, dried food and fly specks can also appear as dark spots and streaks. Outlines of moisture stains will appear as dark lines or areas surrounding lighter areas. Seams and cracks in wood panels appear as dark lines. All dark areas and inconsistencies should be investigated under magnification. Breaks in the surface layer, either where the varnish does not completely cover, or worn or scratched areas, will also appear as relatively darker patches. Sometimes the original varnish is stripped off, repairs are made to the painting and a new varnish layer is applied. Even under a new layer of varnish these repairs generally show up as dark spots. However, the older the repair, the less noticeable the difference.

Areas of a painting that have a very thin layer of varnish and areas that have not been covered completely with varnish will show as dark places. This can be the original condition of the painting. You can verify this condition by viewing the area in visible light with magnification.

You also need to be aware of a product called "masking varnish" used to hide repair and restoration work. Masking varnish is a coating specifically designed to prevent ultraviolet light from reaching the paint layer. Paintings treated with a masking varnish have a heavy green color that appears greasy.

Be sure to check the reverse side of all suspect spots and areas under magnification in both white light and black light. Do inconsistencies on the reverse correspond to the suspected areas on the front? Patterns of bright pinpoints, like stars in the night sky, are generally caused by the sizing and ground or support showing through cracks or wear in the outer layers. Mold will fluoresce bright yellow to orange. Verdigris, naturally occurring corrosion commonly found on copper panels, also fluoresces yellow or orange.

When viewing the sky areas of landscapes under black light, dark edges may appear around clouds. These dark areas are generally not repairs. The solid bright white paint of the interior of the cloud reflects more light than the more lightly painted blended white edges of the cloud. Contrast between interior and edges creates the dark appearing outlines. Checking the painting by alternating visible and black light, with and without magnification, will help you distinguish this effect from an actual repair.

Another feature to consider is craquelure, the cracks (crazing) in varnish or paint. Craquelure, if present, should have a fairly consistent appearance. Matching original craquelure with repair materials is very difficult. Therefore variations in craquelure may be a sign of repairs, repainting or some other disturbance of the original surface.

The majority of authentic signatures were usually applied to the paint layer before the varnish was applied when the art work was originally created. This means original signatures should appear like the surrounding original paint surface. Recent signatures applied on top of the varnish layer generally appear dark or seem to be floating like other repairs.

However, signatures must be analyzed with caution. Some authentic signatures do appear on top of the varnish layer. To authenticate a signature, you must take into account a number of factors other than black light alone. Is the signature location typical compared to other known examples of the artist? Is it the correct form and size? Is it consistent with the artist's painting techniques?

Glazing is the application of a thin film over already dried paint. It is used in restoration to conceal wear or over cleaning. Dark glazes well matched to the painting may be difficult to see under black light. The more translucent the glaze, the less likely it will fluoresce. You may have to alternate viewing between visible and black light to locate glazed areas.

Inpainting, sometimes referred to as repainting, simply means applying new paint to match surrounding color in a repair or restoration. Inpainting does not necessarily have to use the same type of paint as the original. For example, acrylic may be used over the original old oil. Oil, acrylic, gouache or watercolor paints are all used for inpainting. Fluorescence varies among the many paints which may be used for inpainting. Watercolors, for example, are difficult to detect so don't rely on black light alone.

Sometimes, for example, restorers do not properly fill in areas of missing paint. Even though inpainted, these areas are not level with the surrounding original paint. Inpainting, which may be a perfect color match at the time of repair, may change with age. New paint ages differently than original paint and tonal differences between new and old can eventually be seen. Some changes may be seen under visible light; others only under black light. The point is that you must use a combination of tests for a thorough evaluation.

Generally speaking, new papers fluoresce white or blue-white because they have been treated with modern brighteners and bleaches. Older papers usually appear gray or creamy white. The years 1935-1945 are when most changes in papers took place. The best place to shine a black light is on the back of the paper; next best is along the edge. Even if a paper is glued to a mounting board, the edge will provide enough surface to make a valid test.

The four most common alterations to works on paper are: 1) bleaching, 2) additions of color or lettering, 3) erasures and, 4) paper repairs. All disturb the original surface and will fluoresce, turn dark or appear to float above the surface. Most disturbances can be detected through picture frame glass. If possible, however, all paper goods are best viewed removed from frames or holders.

Bleaching is the chemical removal of stains and discoloration. Stains may return so it's desirable to detect bleaching even if the stain is not apparent under visible light. Additions might be a forged signature, printing date or new colors. Erasures are generally an attempt to remove modern lettering such as recent copyright dates or reduce dirt and stains. Paper repairs are usually small patches of paper placed behind holes in the original surface. Although fairly easy to detect out of the frame, a repair can be difficult to detect in visible light from the front in a frame. Most paper repairs fluoresce from glue holding the new paper, the new paper itself or the new colors used to blend the new paper into the surrounding area.

While black light can be used to learn more about a print or painting, the accuracy of the evaluation depends on the observer's knowledge. Observers must understand how repair materials interact with original surfaces and how to separate repairs from conditions caused by natural wear and aging. A variety of tests using magnification, visible light and black light gives more accurate information than relying on a single test 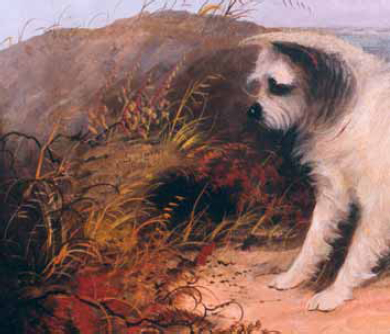 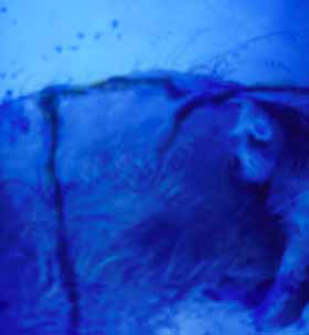 Fig. 3 Layers of a painting 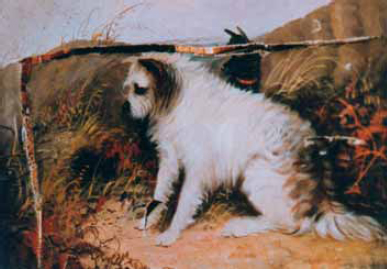 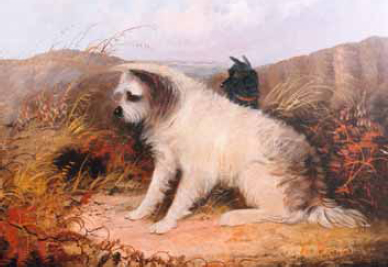 Fig. 5 Painting in Fig. 4 after restoration. Canvas repaired and repainted. No damage seen in visible light. 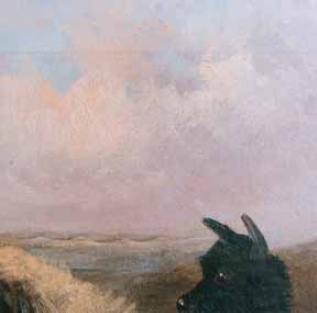 Fig. 6 Close up of restored painting. Repairs do not show in visible light. 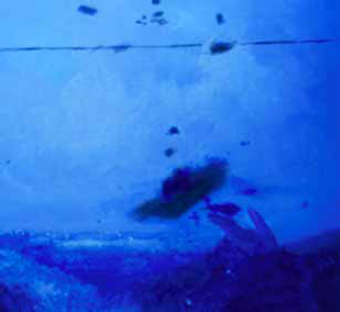 Fig. 7 Repairs in Fig. 6 as seen under black light. The repairs show up as dark spots, some "float". 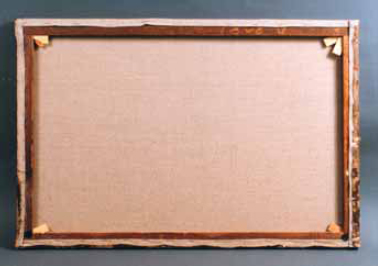 Fig. 8 Reverse side of repaired oil painting in Fig. 4. No evidence of the torn canvas can be seen. 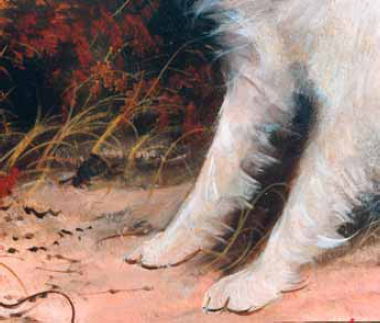 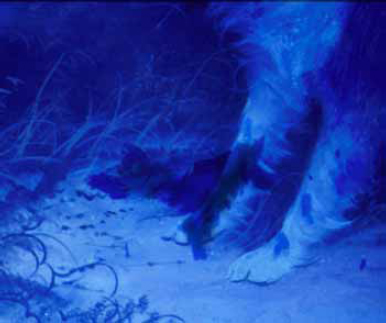 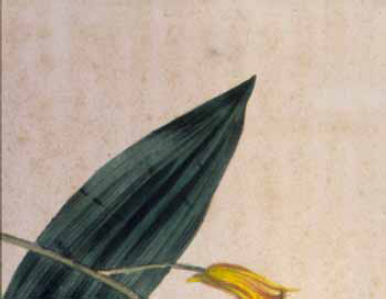 Fig. 11 Stains and moisture damage on paper prints do not always show up in visible light. 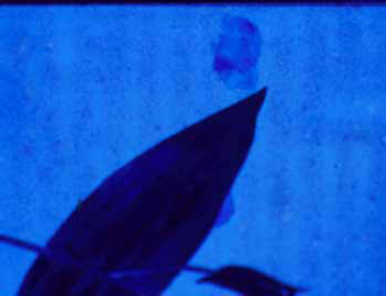 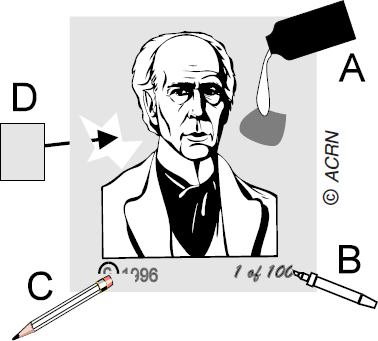 Typical problems with prints on paper. 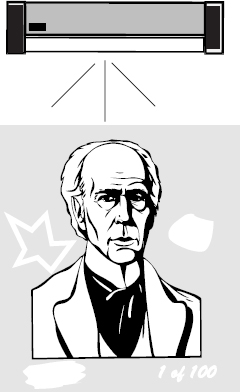 Bleaches, erasures, repairs and most additions fluoresce under long wave black light. In general, any change or disturbance to the paper's original surface can be detected by black light.

Real Or Repro is an industry resource powered by

a vetted marketplace of dealers and winner of numerous